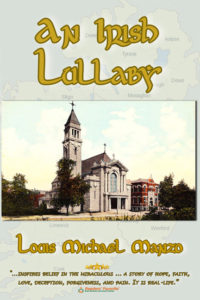 AN IRISH LULLABY, a fiction manuscript authored by former Jersey City native and New Jersey State Assemblyman, Louis Manzo, will be traditionally published and offered for advance sale on Amazon the third week of August, followed by distribution to bookstores. The book is published by Moonshine Cove Publishing of South Carolina, a small press that has been recognized with several literary awards. A radio advertising campaign, accompanied by book launches and signings, are planned for September. BookTowne of Manasquan, NJ will debut the book with a launch on September 14th.

Manzo had previous success with his debut, non-fiction book, RUTHLESS AMBITION: The Rise and Fall of Chris Christie, which was published by Trine Day Publishing of Oregon in 2014. The book was well reviewed and sold, according to its Amazon webpage.  Manzo also authors an opinion blog on the book’s website, which successfully forecasts political elections and events in the current day’s news cycle.

AN IRISH LULLABY is set in the Saint Aloysius Parish neighborhoods of Jersey City—where Manzo grew up. Many of the neighborhood’s fixtures from yesteryear star in the book, including a prominent, beloved Jersey City resident icon. “I was fortunate to share the customs, heritage, stories and lives of so many families who befriended me. AN IRISH LULLABY is my tribute to them,” said Manzo.

AN IRISH LULLABY is described as a modern day GOING MY WAY [the famed Academy award winning film directed by Leo McCarey and starring Bing Crosby]. The story depicts a person’s search for relevancy and fulfillment, set against the backdrop of one of the most controversial, moral, and burning social/cultural issues of our time: abortion. The story isn’t preachy but it is factually well-researched, with lighthearted moments that offset the serious themes.

The books website [anirishlullaby.com]   is active and stacked with information about the book—synopsis, sample chapter, background, and pre-publication reviews.